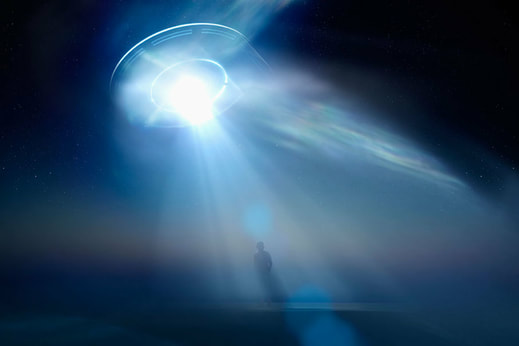 Approriation
Appropriation is the action of taking something for one's own use, typically without the owner's permission.     There are many accounts of an owner of a farm or a ranch seeing grand lights originate above the property, and animals being beamed aboard, or even seen being raised above the ground before the craft becomes startled and vanishes before their eyes.   The next day, farmers and ranchers report cattle mutilations with organs being harvested as well as crops and fields completely obliterated.     .

Was it a fox in the hen house?   Countless eye-witness encounters going back as early as the 1800's report lights or orbs being seen prior to mysterious happenings.    Native American and First Nation tribes speak of Sasquatch stealing chickens, fish, and even woman and children with some legends speaking to Native Elders, telling their children "star visitors have arrived in the forest", and that they should stay close to the fire?   So who are these Star Visitors?    What does this mean?
A missionary to the Spokane Indians, wrote in his diary that tribes spoke of “men-stealers” with tracks a foot and a half long who inhabited mountains in the area coming and going by the night sky.  So what does that mean?   if Sasquatch is an Alien Species?  and you believe the answer could possibly be yes, then you have to ask yourself, why would Sasquatch be harvesting food and livestock?   Is this for their own research and experimentation?   Are they dissecting our plants and animals genetic material to create resources on their own planet?

Or is it possible Sasquatch is evaluating what we are doing to ourselves and protecting us from further harm?  ​
Sasquatch has often been said, they are the protector of the natural world? Is Sasquatch worried about what we are doing to our planet and animals and harvesting plants and animals for research to see how horrible we are treating Earth's living organisms?  Is Sasquatch a possible creation of the Anunnaki and are does Sasquatch posses higher intelligence and are they warning us about what we are doing to our planet since they experienced this first hand?  or perhaps they are subservient to those races alien species already living in the Pacific Northwest? and maybe they are conducting experiments and reporting our evolution to the Telosians?   ​​